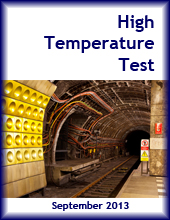 ProMation Engineering Inc., a worldwide provider of electric motorized actuators for industrial use, has successfully completed a key milestone for international ventilation applications in rail and road tunnels and underground passenger platforms such as subway stations.

In an emergency situation such a fire inside the structure, electric motor operated dampers in the ventilation system can act to suppress spreading of the fire as well as to clear smoke from the structure. Most motorized actuators that operate these dampers are required to be "failsafe", where they are equipped with mechanical springs that close (or open) the damper upon loss of power at the actuator. Further, the motorized dampers must function at elevated temperatures to be effective.

The actuators were outfitted with specially designed thermal protection. Sensors monitored the temperature at various locations throughout the test. Once at temperature, the actuators were tested at 30, 60 and 120 minutes. The actuators were fully functional during the tests. Without the thermal protection, normal operating temperature for the spring return actuators is -20 to 150F (-15 to 65C). After testing, both units were disassembled and inspected. While there was discoloration in places on the outside of the thermal layer; there was no observable damage to the internal components. Both test units met their operating specifications for cycle time, electronic operation and repeatability.